"This one's a litte crooked."
What's your caption?﻿
Posted by Penny Harper at 8:35 AM 3 comments:

Cats' hearing apparatus is built to allow the human voice to easily go in one ear and out the other. - Stephen Baker
Posted by Penny Harper at 8:53 AM 1 comment:

I cannot begin to describe how much this upsets me but I will try not to go off in a tangent. To put it simply, the activity of capturing wild animals and keeping them in captivity for people's amusement and to line the pockets of already wealthy businesses needs to be considered illegal and should be stopped.

The research shows that this is in no way beneficial to these animals individually or their species. The marine parks don't even observe humane handling of them, working them literally to death and then getting a new one.

The 1972 Marine Mammal Protection Act generally prohibits the hunting or capturing of marine mammals, or importing them to the United States. But at the behest of the theme park industry, Congress gave an exemption for marine mammals in zoos and aquariums, under the guise that display of these protected species is a valuable tool for educating the public about marine mammals and their value to marine ecosystems ..... These educational programs are something of a charade. An analysis of these materials found information that was biased, misleading, or plainly incorrect. People take it on faith that such materials, along with public display itself, meet a high standard of meaningful educational value, but that faith has been misplaced. ~ Humane Society of the United States

My first hand experience is with a dolphin being held captive and trotted out to perform like a circus animal at a Canadian theme park. I worked at a water treatment company at the time. The president of the company himself personally took care of the water the dolphin was being kept in. It was a daily battle to manage the number of harmful microorganisms in the animal's pool. There were times in the summer that he had to visit more than once a day because of dangerously high levels of such things a streptococcus among other things.

Remember the movie "Free Willy"? That was a real life orca named Keiko that was formerly held captive at Sea World. After watching the movie our family decided to boycott all marine parks, zoos, circuses, etc. We won't give our money to make these folks who mislead the public about the safety and welfare of the animals richer. It is strictly a business decision for them - if a trainer is attacked and killed, hire another one. If a whale or dolphin dies, go get another one. Below are links to the two articles cited here:

Article: Whale of a problem Humane Society of U.S. 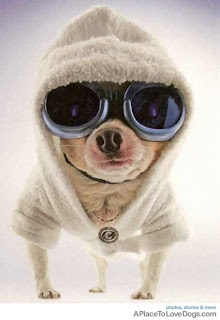 Visit "Animals with Glasses" for more hilarious photos.
Posted by Penny Harper at 12:00 AM 1 comment:

Dealing with Doors
Preamble: Humans need to know basic rules. They can be taught if you start early and are consistent. You will then have a smooth running household.

DOORS: Do not allow closed doors in any room. To get a door opened, stand on hind legs and hammer it with forepaws. Once door is opened, it is not necessary to use it.

After you have ordered an "outside" door opened, stand halfway in and out and think about several things. This is particularly important during very cold weather, rain, snow, or mosquito season. Swinging doors are to be avoided at all costs.

(http://www.kittykondo.com/doors.htm)
Posted by Penny Harper at 7:18 AM No comments:

When the dog won't walk

Happy Saturday everyone! I have a question for you this morning. One of my clients has a dog that will not walk with me. At first she would walk a bit but just stop in the middle of the street or lay down in the grass and refuse to get up. Gentle leader seemed to deter her all the more. Then for a while she would not leave the house. When I arrived I would find her lying on a bed upstairs on her side and that is how she would stay for the half-hour visit. Now I have been able to coax her outside using a ball but she just lays on the grass in front of the house and hoards the ball. This week I tried using two balls and I had to laugh because managed to have both in her mouth at the same time. It is very difficult to get her back up and back in to the house. She has a very sweet personality and she is very affection - loves to cuddle. She is also about 100 pounds so it is impossible for me to manage her physically.

Am I off base in thinking that this is an "alpha dog" situation or a trust situation? Any opinions or advice would be very welcome because I really like this dog but I don't want to exacerbate the behaviours. I'm also concerned about her weight and power because if I get her on the street and she is not listening to commands, we are only one cat away from one or both of us getting hurt.

Thanks my lovelies!
Nanny

Law of Cat Magnetism:
All clothing attracts cat hair in direct proportion to the degree of color difference between the cat hair and the fabric color.

(http://www.kittykondo.com/catlaws.htm)
Posted by Penny Harper at 12:00 AM 2 comments:

I don't know why they call it dumb. I thought it was really cute.

Posted by Penny Harper at 12:12 AM No comments:

I love this! On the website Pets MD you can use their Symptom Checker to check out symptoms when you suspect your dog or cat is ill﻿. It is so easy to use. Just select dog or cat, click on the area of the pet's body that is causing concern, and check off the symptoms (you can check more than one). Click the "Click Here" button and a list of recommended articles comes up. Select one to read the full article.  The screen shot below shows my test run. I selected (randomly) cat, abdomen, vomiting: 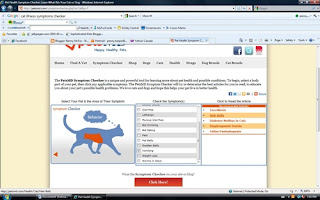 This tool is not meant to be used for folks to self diagnosis their pets. It's more of a confirmation that you may need to take your pet to the vet.  Pets MD also offers the Pet Health Symptom Checker as a gadget for your blog or website!  Scroll down to try out mine.﻿

Have a great weekend!
Nanny

Posted by Penny Harper at 8:36 AM No comments: 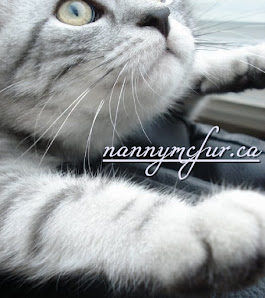 Promote Your Page Too

Free Shipping on orders $75 or more with code SHIPCABIN

Save with Only Natural Halloween is coming! We’re your one-stop shop for everything Halloween for pets at PetSmart.com!